All about the food...

Sorry I haven't updated in a couple of days (don't worry - if I'm not updating, it's because there's no real news - if there's bad news, you'll know because I'll be asking for prayer requests!) Anyway, in good news, Bodie has gotten SO MUCH MORE smiley in the past 2 days! It's so fun. Here's some proof: 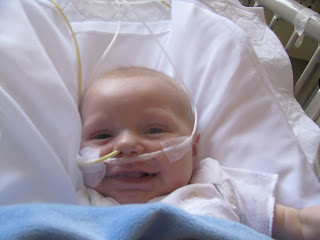 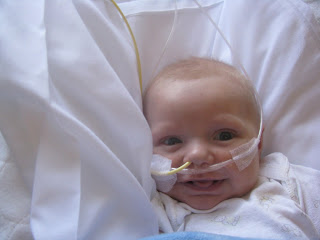 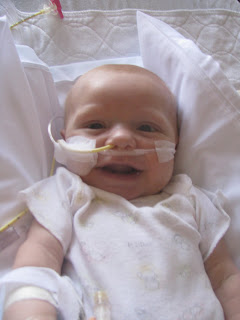 (and he's now off the oxygen entirely, so I should have pics tomorrow with only one tube on his face!)

Bodie was doing so well they were about to move us to the step-down floor! But since Bodie has had Paraflu, we have to wait for an isolation room so that no other kid catches it from him (the upside to this is that we don't have to worry about him catching anything else from a roommate). So, he's still in the CTICU until a private room opens up.

Our big challenge now is feeding him. He got up to full feeds via the ng tube last night and was doing so well with them that they started letting him eat by bottle today. He did ok with it, but is definitely working hard. The poor guy sweated through every feeding today. (Some cardiac kids do this naturally, but Bodie doesn't, so we know it's something new.) They're not sure why he's doing it, but they think it has to do with the fact that he hasn't eaten in a couple of weeks, he's generally in a weakened state, and he still has some congestion, so it's just taking a lot of work for him to eat and breathe at the same time. We're hoping as he gets stronger and reconditioned to eating orally, the sweating will go away. The other problem is that he's thrown up a few times today. It's not clear whether it's related to his feeds or the coughing still left over from the Paraflu. For the time being they're watching it. But it's clear that we really need to get calories into him - the poor guy has lost a fair amount of weight and we really need to beef him up so that he doesn't have to work so hard to eat. So, I think they'll probably do a combination of oral feeds and ng feeds (since he doesn't have to work so hard for those) to get him over the hump and strong enough to take everything by mouth.

So our biggest prayer right now is just strength for Bodie - pray that his feeds get better, so that he gets stronger, starts gaining weight, and can eat more!!!
Posted by Amy Bennett at 7:48 PM