Bodie, "helping" the tech today during his echo (he has started reaching for things in the past few days - it's super cute): 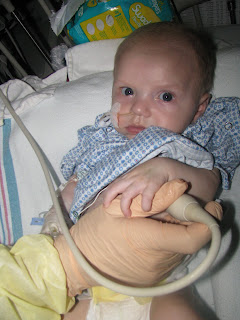 So, since I last posted, Bodie has been sweating...and sweating...and sweating. This morning, it was so bad during this feed that he was literally dripping sweat. The poor kid looked like he had just run a marathon. And his BNP went back up to almost 4,000 (it had been down to the 600's just a few days ago). So, they put him back on the Milrinone drip and will reassess tomorrow. The general consensus is that this is all due to overcirculation due to his really huge shunt. The good news is that kids with this problem generally grow into their shunts and it stops being a problem. The bad news is that Bodie will have already had his second surgery before that has a chance to happen.
So, we're kind of in a catch-22. Bodie needs his second surgery to correct his overcirculation issue. But he's not big enough for that surgery yet. But he can't gain weight because he's burning all of his energy overcirculating. Did you follow that? I know, it's complicated (especially when you throw in the fact that he still has at least 4 weeks of antibiotics before he can have surgery).
So we wait and see what Bodie does. He may just need to stay on Milrinone until his surgery, if that's what he needs to give his heart enough help for him to gain weight. Or, they may be able to manage it with other meds. Bodie will tell us. In any case, he needs prayer - that they can figure out the right drug cocktail for his little body to calm down and start beefing up.
Thanks!
Amy
Posted by Amy Bennett at 9:03 PM