Bodie is doing MUCH better! His cough is so much better that he's not even really desatting anymore with it. He's still weak, but he's steadily getting stronger and able to eat a bit more by mouth each day! YAY! He's gained weight the last 2 nights, so he's definitely getting back on track. He's now doing most of his feeds during the day by mouth and his nighttime feeds by ng tube. The plan is to slowly increase his feeds as his strength comes back and he's able to tolerate it. Once he's able to take everything by mouth (and gain weight doing so), we'll be able to go come and beef him up for just a bit before his next surgery! Praise God!!!

And he is so stinking happy! It looks like he's outgrown a lot of his newborn fussiness - now, he'll generally smile at anyone who looks in his direction: 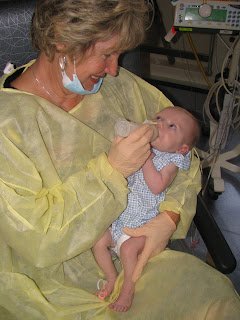 Goofing off for mommy 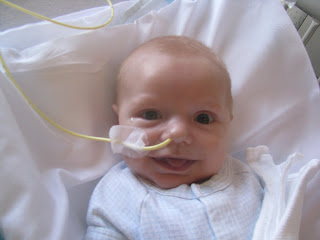 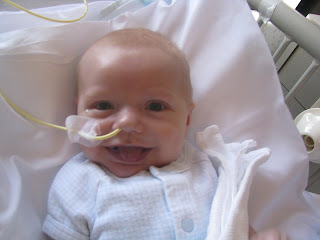 Catching his smiles
Posted by Amy Bennett at 9:19 PM