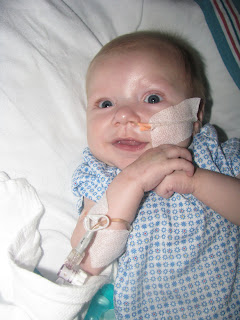 Well, Bodie's weight gain has stalled in the last few days (despite downing around 25oz of milk a day, well above his "minimum requirements" per his weight) and they can't wean him off Milrinone (despite maxing him out on Enalapril and adding Diogixin, which should help with his heart squeeze). The general consensus is that his little heart is just working too hard and they need to figure out a way to help him out. So...they've decided to start him down the track for his Glenn, the 2nd of his "scheduled" surgeries (it will actually be his 3rd open heart surgery, since he had the pacemaker/BT shunt surgery in April). The first step in doing that is his cardiac catheterization, to look at his pulmonary pressures and make sure everything is ok for the Glenn. It hasn't been officially scheduled yet, but word is that it will be tomorrow or Friday.

It's hard not to be in a total panic thinking about him going back to the cath lab, thinking back on his last experience there. For those of you who have only recently been following our blog, Bodie did not respond well to the one and only cath he has had thus far. He went into cardiac arrest on the table before the procedure even began, and went into arrest again upon returning to his room. He needed chest compressions both times (although for less than a minute each time, thankfully). Then we ended up almost losing him later that night. BUT, he was much sicker then - that was prior to him getting the pacemaker and since his resting heartrate was in the 50's at the time, I guess he was technically coding before he ever even got to the cath lab. So, we have every reason to think this cath will go much better and that he won't have the problems he had last time. But of course, the worry always sits in the back of your mind.
It's in a weird position to be in, now knowing the cath and his Glenn (assuming the cath goes well) are so close in our future. I mean, of course we knew they would be. The Glenn window is 4-6 months and he's already 4 1/2 months old. And we KNOW he won't get any better until after his Glenn. The hope is that the Glenn, because it allows for passive bloodflow from the head to the lungs, rather than forcing the heart to pump it over a shunt, will cut down on the work the heart has to do and help Bodie out considerably. The general thought is that it should help him a lot, particularly considering that a lot of his problems seem to stem from having to pump blood over his large shunt.
But it's still weird to look at him, so smiley and silly, and to know that his next open heart surgery could literally be within weeks. Infectious Diseases has cleared him for both the cath and the surgery at this point (meaning he does not have to complete his entire course of antibiotics before doing either). This is technically exactly what we were praying for (mine as well kill 2 birds with 1 stone and do his next surgery while he's stuck in the hospital completing his antibiotics anyway), but all of the sudden it's so much more real and that's scary.
So, tonight, please pray that:
1. Bodie keeps eating and starts putting on weight (they'd prefer him to be at 11 pounds for his surgery, but will take him lower if necessary - he's not too far off).
2. Bodie's cath goes well and shows no surprises and that his pulmonary pressures look good enough for his Glenn.
3. Bodie doesn't catch anything else.
4. Dusk and I can have peace with the thought of another open-heart surgery hanging over our heads. Pray that we can rest in God and His will for our son and our family.
Thanks prayer warriors!