It's really going to happen 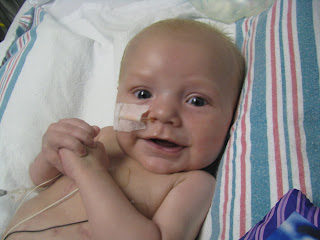 Well, Bodie has been scheduled for his cath tomorrow at 10am. The general consensus from most of the doctors is that his current problems stem from overcirculation from his really large BT shunt, which will be solved by the Glenn (since he'll no longer use his shunt after the Glenn). So, they want to check out his lung pressures, make sure they're ok and then send him for his Glenn. But our current attending keeps saying "let's do the Glenn to get a better idea of what's going on with Bodie to determine the best possible route for him." This statement literally keeps me up at night because, as far as I have been told, he only has 2 possible routes: (1) Glenn or (2) transplant. We do not want to be talking transplant yet. Soooo....please pray and pray hard for Bodie tonight and tomorrow morning!!! Pray specifically that:
1. His procedure itself goes well, with NO surprises and that his little body comes out fine.
2. His lung pressures are good so that he is a GOOD candidate for the Glenn now.
3. No other problems with his physiology show up.
Oh, and in completely unrelated bad news, Sierra has her first cavity. I know, I know - bad, bad mommy! :-( Because she's so young, they're going to have to put her under general anethesia to fill the large cavity and a couple of smaller ones just starting. We're supposed to fit this in within a week or so. Not quite sure how we're going to do that. Please pray we get it worked out.

Thanks - and I'll keep you updated throughout the morning tomorrow!
Amy
Posted by Amy Bennett at 6:21 PM