All geared up...for a total change of plans 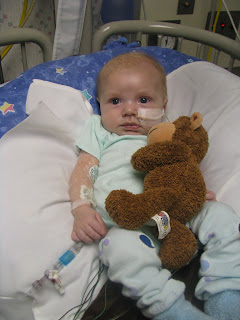 Well, we talked to Bodie's surgeon today and the long and short of it is that Bodie's too stable for his Glenn right now. Talk about ironic, right? Basically, they wanted to do his Glenn early since he was really struggling to gain weight and had an unexplained dependence on milrinone. (Bodie was actually in an odd situation since they typically only do early Glenn's because kids are satting too low (high 60's to low 70's) and Bodie was satting too high (high 80's to low 90's) - kids who are satting too low have to have their Glenns because there's no other way to fix the problem, but kids who are satting too high will grow into their shunts (if they can get stable enough to grow), and can last longer before needing their Glenns. But since Bodie couldn't gain weight, he couldn't grow into his shunt, so they were talking about doing his Glenn early.)
But in the last 2 weeks (since the cath, basically), he really turned a corner and started gaining weight like gangbusters AND they weaned him off the milrinone without any problems. So, now they are no longer in a situation where they have to do the Glenn right now and since he's still on the small side (a little under 12 pounds and the bare minimum that they like to see is 11 pounds), they'd prefer to let him grow a little bit more. Since he now appears to be growing into his shunt and is actually growing, they want to see how much he can grow. The bigger he is, the better chances he has of having a successful Glenn.
So, the surgeon wants to get him stable (i.e. make sure he continues to do well off Milrinone and finish his antibiotics) and then send him home to let him grow at home! We don't know yet how long that will be, but I'm planning to talk to the attending tomorrow to see whether the cardiologists actually agree that Bodie can go home before his Glenn and if so how soon we could come home (he still has 10 days or so of antibiotics). We'll see.
I think this is really a good thing for Bodie. Honestly, it's a bit tough for us as we had mentally geared ourselves up for his next surgery and were so excited at the thought that he'd be so stable after it (most hypoplasts are MUCH more stable after the Glenn, almost like regular kids). But, we want what's best for Bodie - and if that means giving him a bit longer, then so be it. Please just pray that he continues to do well off the milrinone and that he can come home soon!
Thanks,
Amy
Posted by Amy Bennett at 7:08 PM