A hard day to be a hypoplast 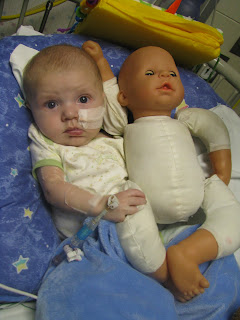 Yeah, so I'm the size of Sierra's doll...what are you gonna do about it?

Bodie is doing well today. We're still in a holding pattern until his surgeon returns tomorrow and then we should hear whether his Glenn will be later this week or will be put off until he can gain a little more weight.

His heart friends, however, have had a rougher week. I'd like to use tonight's blog to ask for prayer for these little guys (both hypoplasts) and their families... 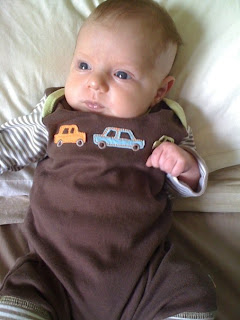 Thank you so much for your prayers for Josh. It is with a heavy heart that I tell you all that Joshy earned his angel wings this morning. He was 10 weeks old. He was such a brave fighter and fought so hard, but his little body just couldn't take it anymore. Please pray tonight for his parents Sarah and Dave, and his 2 year old brother Harrison. I just cannot imagine what they're going through right now.
Wyatt 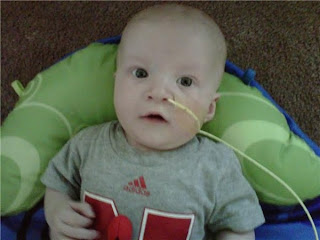 I don't think I've mentioned Wyatt on the blog before. Mostly because honestly, he is such a steady little guy and has flown through everything so far. He's a week older than Bodie and had his Norwood a couple of weeks before Bodie. (He's in Omaha.) Whenever I'm talking about him to Dusk, I always say "you know Wyatt, the kid who spent 60 seconds in the hospital after his Norwood" - he spent a little longer than that, but was out in record time - I want to say 10 days or somewhere around there. It was crazy. That's how steady he has been. Well, he had his Glenn a little over a week ago and has had numerous complications from too much acidity in his blood and fluid buildup. His parents updated his carepage site today with the news that he had several blood clots and has been put on ecmo, or a portable bypass machine. You don't mess around with ecmo - really, you only use it if you have no other option. There are a lot of serious possible side-effects, including injury to the brain. But his doctors are trying it to try to give his heart a break so that his little body can recover. Please pray hard for Wyatt tonight, that his stay on ecmo is incredibly short and that he is recovering quickly!!!
Thanks everyone,
Amy
Posted by Amy Bennett at 8:49 PM