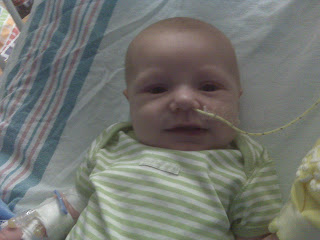 Well, it appears we're going to be here longer than we had initially expected. Bodie again has the doctors stumped (like that surprises us, right?).

The bloody stools went away for a half a second and then have been coming and going since then. He has added to that a general lack of desire to eat (I know, absolutely out a character for him!!!) and sweaty screaming fits when he's hungry (but then gets so worked up that he won't eat - it's a particularly vicious circle). He's fine, smiley and happy most of the time, unless he's hungry or we're feeding him. Really fun times.

They don't know what's going on, but because he's not eating, they put an ng tube in to get his full feeds in him (he can take what he wants by mouth and they put the rest through the tube). They're thinking it's either an ulcer or a milk protein intolerance. The problem is, the only way they can know for sure is via endoscopy (which is invasive and they'd have to put him under for it, which they don't want to do.) So, they're starting with milk protein intolerance first - I've cut all dairy from my diet and if we don't start to see at least a little improvement in 2-3 days, they can rule that out.

In the meantime, I've asked for a pain team consult. Even though it may very well be a milk protein intolerance, I cannot help but feel that something else is going on. It is just way too coincidental that all of his symptoms (especially the fits where he turns pasty white and literally starts dripping sweat) all started when we started weaning his narcotic (he was switched from morphine to tylenol w/hydrocodone the day before we were discharged last time, and then we did a slight wean down on that last Thursday). Hopefully the pain team can come up with something for us.

Needless to say, it's frustrating to watch. I know God has already taken care of him through everything already and will get him through this as well. I also know this is nowhere near as serious as what we were facing last time. But it's still frustrating to be in "wait and see" mode when you just want it figured out so you can start fixing it and get your child home!!!

Please do keep praying for Bodie. Please pray specifically that his weightloss has stopped and that he can now start gaining again. And pray that they find a cause for his sweaty fits. And pray that he starts eating well again.

Thank you so much prayer warriors!!!
Sent from my Verizon Wireless BlackBerry