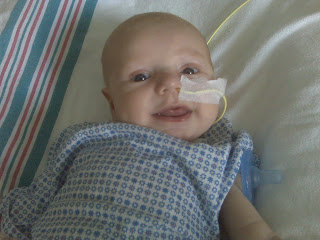 Today was a really tough day. They spent the better part of the afternoon stabilizing Bodie and then took Dusk and I into a conference room (never a good sign, by the way). We had a long talk with the doctors and the long and short of it is that Bodie is REALLY sick - his heart function has deterioriated as have his liver and kidneys. (Don't know how he managed to get so sick in the hospital while I was trying to tell them that I thought something was seriously wrong, but that's honestly a line of thinking I just can't go down). This is not the troubling part of it - as I understand it, this is not permanent damage and hopefully function in these areas should improve as Bodie recovers over the next few days.

They still don't know what made him so sick, but they're working on that.

The troubling part is just how fragile Bodie is, as we've clearly seen in the past month. To put it into perspective, at CHLA, approx 85% of hypoplasts who make it through the first surgery make it to the second. When I asked the doctor today if Bodie was more likely to be in the 15%, he confirmed that yes, Bodie's complications make that more likely. He also said that he didn't anticipate that Bodie would be able to leave the hospital before his next surgery, the Glenn. He also said that while the Glenn surgery typically makes most kids really strong (almost as "normal" as heart healthy kids), he did not expect it to do that for Bodie. While it will definitely make him less fragile, he will continue to be fragile.

So you can see, it has been A LOT to take in and Bodie needs prayers for another miracle. God has protected him so far and helped him to continually beat the odds. We have faith that God has great plans for our sweet son and that He will continue to protect him. Please, please, please pray for a miracle for Bodie and that he again astounds the doctors and makes them revise all of their expectations for him!

Amy
P.S. The pic was taken yesterday. :-)
Sent from my Verizon Wireless BlackBerry
Posted by Amy Bennett at 5:42 PM