Well, apparently Bodie has made this his new motto, because when this kid gets sick, man does he get sick! The viral panel came back positive for rhinovirus (ok, that's just a fancy name for the common cold, but it sounds much cooler, right?). So, Bodie is now battling both c-diff and a cold (either of which would have independently sent him to the hospital) at the same time! I don't know - they keep telling me how fragile Bodie is, but I'm thinking that he managed to deal with both untreated symptomatic c-diff and a cold at the same time and made it through, so he can't be that fragile...

Anyway, the good news is that, at least for the time being, it seems to be confined to his upper respiratory track. He has a nasty cough, but his lungs are still clear, thank God. And a positive viral panel really helps to explain a lot - his continued high BMP and reduced heart function especially. It also helps the doctors understand why he responded so badly to the c-diff. Since he just started showing symptoms Sunday, chances are it was starting to brew mid to late last week, so it was probably the tipping point to what pushed his little body over the edge, poor guy.

The cough is really bothering the poor guy - I spent most of my day looking at this. 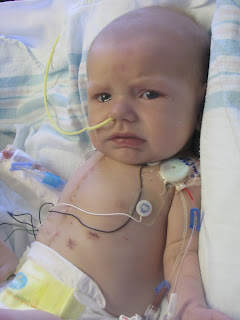 Seriously, how sad is it???

And, he found his tongue, so I got some of this: 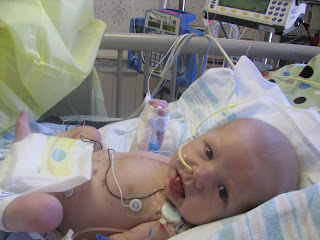 And, finally, got some of this as well!!! 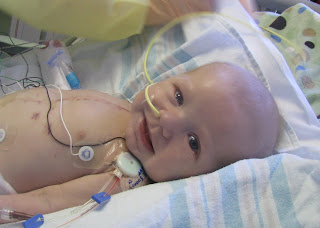 Prayers for tonight:
1. His platelets have started to increase; please pray that the heparin test comes back negative and his body continues to increase platelet production on its own.
2. Pray that his BMP starts trending back downward and comes back to within normal range.
3. Pray that his heart function returns to normal.
4. Pray that he gets over this cold quickly so that his body can get to healing!

Thanks!
Amy
Posted by Amy Bennett at 9:18 PM