See that??? Tubes are GONE! 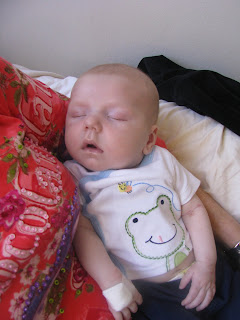 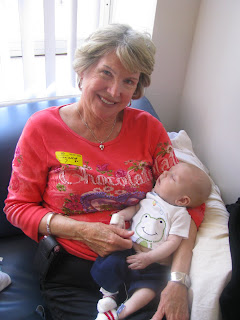 Mommy & Sierra at her preschool's Mother's Day Celebration (while Gigi loved on Bodie at the hospital): 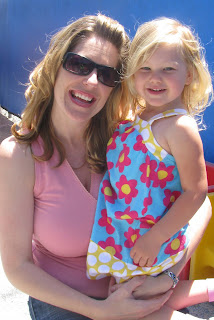 As unbelievable as it is to write this, it appears that Bodie has gotten yet ANOTHER miracle!!! His final GI study, the saliva scan, was this morning - and it came back completely normal! That means he's not even micro-aspirating his saliva. And if he's not aspirating that, which is really thin, the thought is that it's highly unlikely that he's aspirating his feeds, which are thickened. So (drumroll, please!) - they're saying NO G-Tube and he can go back home on thickened feeds!!! PRAISE GOD!!!

Actually, they were already leaning in this direction last night, so pulled his NG tube and moved him to all PO feeds (all oral feeds and meds). And he's done great so far! He's up to 2oz every 2 hours, which is a far cry from the 4oz he was eating before we brought him in, but honestly I think he was probably overeating a bit since he just didn't feel well due to such low cardiac output. We're going to slowly increase his feeds until he gets to a point where he's comfortable - but my guess will be that it will end up being around 3oz a feed or so. He's also eating a bit slower, which is nice to see - he used to inhale his feeds and was almost manic about the bottle. He's a little more chill about it now - and him eating a bit more slowly makes me feel better since it really reduces the risk of any aspirations.

Speaking of chill, I had written a few days ago that he was such a happy relaxed baby now. Well, apparently he heard me saying that so decided he needed to act out. Wednesday and Thursday he was IMPOSSIBLE - so fussy and agitated. He would calm when I held him, but just couldn't handle it if I tried to put him down. He was also super sweaty, which can be common for cardiac kids, but hasn't been with him in the past. I was a bit worried since these symptoms had coincided with starting his oral feeds back up - but I was holding out hope that it was due to the teeny-tiny morphine weaning they'd been doing. So, they put him on a patch that's designed to help with narcotic withdrawal, and ever since, he's back to his (new) calm self. Thank God!!! What a relief that is - to know it's just drug withdrawal and we'll work through it!

So, miracle of miracles, they're already talking about sending us home! Just a few things stand in our way:
1. His little morphine addiction. He can go home on the patch (thankfully!) and then we'll wean him off the patch once he's home. But his morphine is still via IV. So, they have to switch him to oral morphine (or methadone) and find someone (either his pediatrician or CHLA's Pain Management team) willing to work outpatient with him and manage his pain as he weans. I don't think it'll be a long process, but they don't want to keep him in the hospital just for that.
2. He is still on hydrocortisone via IV. They put him on that when he was decompensating and they were basically throwing the kitchen sink at him trying to stabilize him. They can probably just take him off of it (since he's shown no history of adrenal issues), but occasionally, it can supress the body's own cortisol production and in that case, they'll have to do a slower wean and send him home on oral steroids for a week or two. Again, doesn't sound like a big deal, but they have to work out the specifics.

They're hoping to have this stuff figured out early next week and get us home!!! We can hardly believe it! There is no question that we have just had miracle after miracle with our little man. It is clear to us now that he should not have even made it to his second surgery - and yet, here we are 2 weeks later, already talking about discharge and going home on full oral feeds and on NO OXYGEN!!! PRAISE GOD! We cannot thank you enough for the prayers for our little man in the past few weeks - there is no question that God intervened because of all of your prayers. We can never thank you enough for that. Love to you all!

So, prayer requests for now include working out the logistics mentioned above (and that Bodie's little body tolerates all the weaning!). I'd also like to ask for prayers for a few of Bodie's heart friends:
1. Addie: she is a sweet little 8 month old who has ALCAPA (Anonymous Left Coronary Artery) (super rare - even more rare than HLHS) and wasn't diagnosed until she was 6 months old. She had surgery 2 months ago, but because her heart was so damaged from the 6 months she went undiagnosed, she has a long road to recovery ahead of her. It sounds like the doctors are happy with her progress and optimistic about her prognosis, but it's a long road ahead of her still. Then, to top it off, I stopped by to see her mom yesterday and she's in isolation due to infection. It sounds like it's a pretty bad one (her grandmother said something about incubation). Please pray for this sweet girl - she does not need anything on top of what the poor thing is already going through. Pray for a miraculous recovery for her little body. And pray especially for her parents, Mark and Dana (and her older sister and brother), for strength, patience and peace to know that God is in control.
2. Jacob: I've asked for prayers for Baby Jacob before. He's the cute little guy who was born a bit after Bodie (also with HLHS) and had some pretty serious complications at birth. I think he's about 6 weeks post op at this point and still in the hospital at CHOP. It sounds like he's doing well, but he's having some residual lung issues causing him to breathe too fast (like Bodie, he had a restricted atrial septum, but his was a bit more restricted from what I understand). They are trying to decide whether he can go home or will have to stay in the hospital until his second surgery (at 4-6 months). Please pray for his cath, scheduled for Monday - pray they get answers and decide he is safe to go home with his mommy, Kathy (and to see his daddy and big brother Aidan, who just turned 3).
3. Christopher: Christoper, a sweet little 3 year old 2 weeks out from surgery (also has HLHS), was Bodie's roomate a few nights ago. He went home, only to come back for his post op appointment today to find out that his incision is infected. They have scheduled him for surgery Sunday morning to go back in and open the incision, clean and cut out the bad tissue, and then close him back up. Please pray that the infection is only superficial and that he (and his mom Heidi) get to go home soon!!!

Thanks and God Bless!
Amy
Posted by Amy Bennett at 8:46 PM