Making progress, but still a few hills to climb 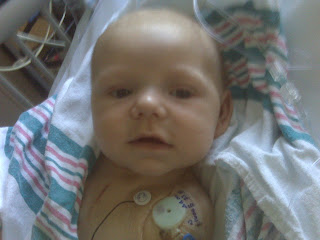 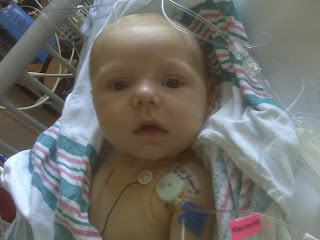 Bodie had a pretty good day today. He's back on room air (no more nasal canula, yay!!!) and he pulled his NG tube out, so he's temporarily completely wireless (on his face, at least), so I'm guessing he's liking that! He was also very smiley today - all of the nurses keep talking about how cute he is now that they can see his face!

Although he's doing MUCH better on the whole (and the doctors continue to be pleased with his progress), there are a few things bothering the doctors:
1. His platelets have been consistently low since Saturday, despite 3 tranfusions so far (they're doing another one tonight). It's most likely just from the infection - they have to wait for his body to catch back up and start producing platelets. But there is a small chance it could be from a heparin antibody related condition, whereby his body responds to the heparin they use to flush his lines, by not producing platelets (or something along those lines). They have prophylatically taken all heparin out of his lines and sent his blood to be tested for the antibody. Hopefully it will come back negative and we just have to wait for his body to catch up. If it comes back positive, it will mean he can't have heparin for the rest of his life (a big pain for future surgeries, from what I understand).
2. He developed a cough yesterday that's gotten a bit worse today. Yesterday they thought it might have just been from the extubation, but they ran a viral panel today just to make sure he doesn't have a virus in addition to the C-Diff. (We don't have the results yet, but it honestly wouldn't surprise me if he has a cold of some sort, given that his roommate on the 6th floor was hacking up a lung the last 2 days we were there.) It definitely makes him uncomfortable - I feel bad for him.
3. His BMP today shot up a lot. That's essentially a measure of heart inflammation and heart failure. I think a heart healthy kid's BMP should be under 300, but they allow cardiac kids to be closer to 500. Bodie's is now over 5,000! Apparently, it can be reactive, meaning something within the last 24-48 hours caused it. But they're not sure what, since clinically speaking, he's improved a lot in the last 24-48 hours. I think if it turns out he has a virus, that might explain it. They're still looking into it to figure out what's happening with our little man.

So, today if you could please pray for the following, we'd really appreciate it:
1. Pray that his body starts producing platelets again so that his levels come up to where they should be.
2. Pray that his cough goes away, so that he can start resting more comfortably.
3. Pray that either he does have a little virus, or they can find some other relatively innocuous explanation for why his BMP rose.
4. Pray that his BMP starts dropping back down and that his heart function starts to improve.

Thank you prayer warriors!
Posted by Amy Bennett at 8:54 PM