One test down, one to go!

Bodie's tests were all supposed to happen Monday, but in true hospital fashion, they didn't even get scheduled until Monday, so they were today and Thursday instead. Today's test was a gastric emptying test. I was kind of confused as to why they were doing this one again since they already did it the first time we had the whole g-tube discussion (and no one could really give me a good answer as to why they were doing the test again), but since it's a noninvasive test, we were fine with it. The test showed normal stomach emptying (yay!) and reflux (which we already knew from the last time they did the test). I asked the Nurse Practitioner whether the reflux meant he would definitely have to get a g-tube and she said no, that all babies had reflux - Bodie will only have to get a g-tube if he's refluxing and then aspirating on the reflux. They're doing a saliva test Thursday, where they put some tracer in his saliva and then take some sort of scan of his lungs to see whether any of the saliva has gotten into his lungs. Here's the thing - he's on solely ng-feeds right now, so in order for the test to be of any use, they'd have to start him on bottle feeds before Thursday (otherwise, all the test would show is whether he's aspirating his saliva, which doesn't matter anyway and they wouldn't do anything about). It seems to me that what they need to do is give him a bottle with some tracer in it and then see if any of that gets into his lungs. But when I asked, all they said was "wow, that's a really good question. We just don't know the answer to that." The crazy thing is that none of the cardiac doctors or nurses have ever even heard of this saliva test (the test was recommended by the GI doc). So, the nurse practitioner is looking into it.

Bodie is apparently a really interesting case (like we didn't already know that, right? ;-)). They know he's not fully aspirating, since he had been doing full oral feeds for 5 weeks prior to being admitted to the hospital and when they admitted him, they did a chest x-ray and it didn't show any fluid in the lungs/pnuemonia (if he had been aspirating, it would have for sure shown up by then, especially considering the huge feeds he was doing the couple of days before we brought him back to the hospital). So, at least it's not a life-threatening condition they're concerned about. But, his pulmonary hypertension hasn't gotten any better, so they're trying to figure out why. A possible scenario is that he's been micro-aspirating (where just enough gets aspirated to irritate the lungs, but not enough to actually show up on a chest x-ray). But it could also be the fact that his cardiac output was so dang low and the shunt wasn't working for him. So, they're trying to figure out how to conclusively determine whether he is in fact micro-aspirating. And apparently that's just not something they have to determine that often, because every other kid they've had in this situation was unable to tolerate full thickened feeds so went home on a g-tube. So, yes, Bodie continues to amaze them. :-)

So, our big prayer request for the rest of this week is that they let Bodie start taking bottle feeds again and they find out that he's not aspirating and let us come home!!!

And, he has been sooooo smiley lately. Just a few pics I got today of my little man... 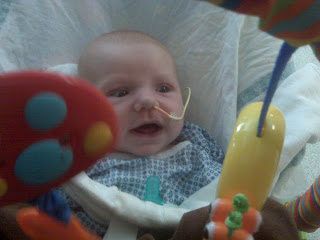 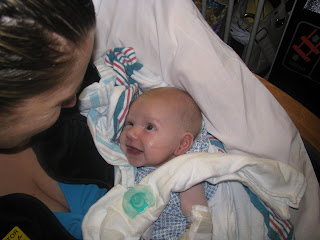 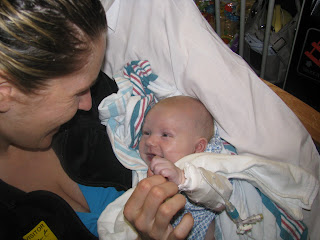 And, for good measure, here's Sierra's school pic this year (my beautiful little girl is getting soooo big!): 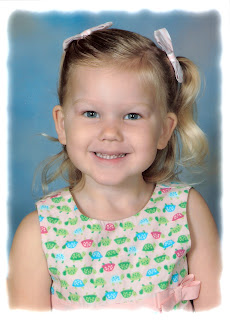