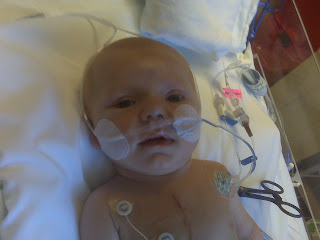 Bodie came off the vent today! And went to straight nasal canula (that's the first time he hasn't had to go to Vapotherm first!) Praise God - your prayers have clearly been working!!! He is just blowing everyone away by how quickly he is recovering! He even smiled at me a few times! If we have learned nothing from this little guy, we have learned that he is a FIGHTER!

The cardiology fellow stopped by today and we had an interesting discussion. They're still trying to figure out why Bodie decompensated as badly as he did. When I asked whether it couldn't all be explained by the untreated c-diff, he told me he didn't think do. They have heart kids (even hypoplasts) that get c-diff symptoms for days before treatment that don't get as sick as Bodie did.

They are thinking that perhaps it has to do with the size of Bodie's shunt. They put in a HUGE shunt during his last surgery (5mm) due to his severe pulmonary hypertension and unexplained dependence on oxygen. Well, wouldn't you know it - his pulmonary hypertension appears to have resolved itself so well that he's left with a giant shunt sending oxygenated blood to his lungs. (Yes, that means we have some awesome prayer warriors praying for Bodie!!!) That's fine generally, but if he ends up getting sick or getting an infection of some sort and his body sends out an inflammatory response, all of the sudden his heart, brain, etc. Have to compete with his lungs for that blood. So, because of that, they're now talking (are you ready for this?) about doing an EARLY Glenn (maybe Jun/Jul)!!! Craziness, I tell you.

I think it's way too early to get too excited about anything (this really is just a theory at this point) - we should know more with certainty once Bodie recovers and the doctors are able to piece together what happened.

Today, please pray:
1. For Bodie's body to continue to heal.
2. For his heart function to improve, so that he is able to come off the Milrinone.
3. For him to come off the nasal canula back to room air.
4. For wisdom for the doctors to accurately determine what happened to Bodie and to develop the best plan for the future.
5. Pray that they decide to let him come home!!!

Thanks as always,
Amy
Sent from my Verizon Wireless BlackBerry