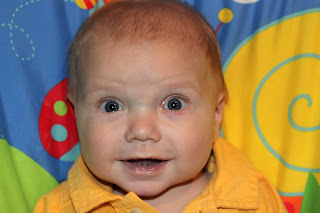 How do we love thee? Let me count the ways:

1. Gone are the periodic screaming fits where Bodie grabs his mouth and arches away 1oz into the feed.
2. My little crazy eating man is back, happily taking 4-5oz at most feeds.
3. Mr. Grumpypants who typically appears between the hours of 5pm and 8pm has been replaced by a significantly less grumpy Mr. Grumpypants.
4. Have I mentioned the fact that it's maybe 2/3 the price of the prior formula, Pregestimil? Oh, and I can get it at my local Walgreen's?

You may remember me posting about how Bodie has been having feeding issues on and off since we came home from the hospital. Initially, it coincided with teeth, so we chalked it up to teething. It really looked like teething (he would pull off the bottle and grab his mouth, screaming). But when he stopped doing it the week he was on breastmilk only, we started getting an inkling that something else was going on. So his pediatrician gave us a can of Enfamil Premium to try...and holy batman, he's a different kid!!! He hasn't thrown one fit and his general demeanor is sooooo much better. (He's always been a really happy baby, but his happy periods were definitely punctuated by horrible screaming fits - they're almost nonexistent now! He still has his fussy period in the evening, but it's nothing like it was previously.) PRAISE GOD!!! And, let's just say that everything appears to move much more quickly through his system now, so I'm guessing this formula just agrees with him a little better. Hoping that means we can start weaning him down on his Reglan (a med commonly given to hypoplasts to aid in stomach motility).

I know it's only been a few days on the new formula (he's still on primarily breastmilk - when I say formula, I'm referring to what we add to the breastmilk to increase his caloric intake), so I suppose it's too early to say definitively that it's our magic cure. But I can say for sure that it at the moment, it is REALLY agreeing with him - which takes a huge weight off of my shoulders! Thanks so much to all of you who have been praying that we figure out what was causing his to not want to eat!
Posted by Amy Bennett at 8:28 PM