Throwing out the book 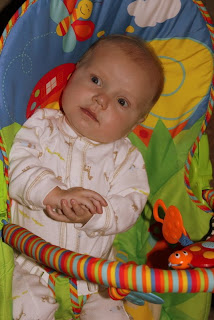 I swear, he's just thinking of ways to torture his poor mama...
Man, this kid...he absolutely refuses to play by the rules. Might as well just throw the rulebook out entirely.
She's not really sure why he's doing this - a number of things could be causing it. The leading contenders are: (1) his good old pulmonary hypertension (ack! We thought we had gotten rid of this after his shunt revision, but no, like that really annoying co-worker you can't seem to escape, it seems to be lurking behind every corner), which should improve over time, particularly since he's on Sildenafil; (2) a phase he's going through / something brewing under the surface (only time will tell on this one); (3) leftover craziness from surgery (apparently, it can take some kids, especially those with pulmonary hypertension, 4-6 weeks (and sometimes longer) for everything to settle back down after surgery); or (4) a collateral (basically, a vein that's supposed to pump blood to the lungs decides to go renegade and bypass the lungs, pumping to the rest of the body instead - probably not the best explanation (feel free to help me out here other heart moms!), but you get the basic idea).
It seems there's a decent chance a collateral has formed and if so, the answer is a trip to the cath lab where they'll coil it off. It's not an uncommon complication after the Glenn - and as much as I don't like the idea of having to send the poor little guy back to the cath lab, at least it's a relatively "routine" procedure (as much as injecting dye into your heart and maneuvering around in there is "routine"). But since we're still so close to surgery (only 2 weeks ago today), she wants to watch him for a bit to see what happens before sending him to the cath lab. There's also a chance he's a little too "dry" (meaning, his dieuretic is ready to be lowered so he's not peeing out quite so much - fluid balance is always the name of the game with these little guys) and that's contributing to the wacky sats. So, we dropped one of the doses of Lasix (yay!). Please pray that time and reducing the Lasix is all Bodie needs for his body to settle down and his sats to settle out in the mid-80's. We really would like to avoid another procedure so soon.

The echo today also showed lowered heart function from his last echo. Boo. :-( But the cardiologist says it's not time to freak out just yet. Again, we're only 2 weeks out from surgery, and everything is still settling down. Also, he was on Digoxin until surgery (Digoxin helps with heart squeeze and function) and they didn't put him back on post-surgery. It could just be that he's not quite ready to be completely off of it yet. So, she put him back on Digoxin. We have a repeat echo next week to see if there's any improvement. Please pray that his heart function improves between now and next week.
Ok, that's the whole business update (sorry it was so long). Now for some fun stuff! Since we're on house arrest and couldn't really go anywhere this weekend, Dusk decided to bring the fun to us, with a campout in the backyard!!! We BBQ'd dinner Friday night and then had s'mores for dessert! The kids got to go to bed sans baths (apparently a big treat for a 3 year old!). Bodie was relegated to the crib in the kids' room, but Sierra got to sleep in the tent with mommy and daddy! Eventually the planes flying overhead (nothing like the good old LAX flight pattern!) brought everyone inside by about 3am, but it was fun while it lasted! The best part, though is that Dusk, while pumping up the whole concept of the camping experience, happened to mention offhand that you pee outside when you go camping. (I assume he was envisioning something a little more rustic than our backyard when he made this comment.) Well, like 3-years old do, she absolutely glommed on to that offhanded statement, talking nonstop about how she gets to go pee on the grass when camping. Now, if you ask her what her favorite part about the campout was, she'll say "peeing on the grass." Lovely. I can only imagine what her preschool teachers think of our family when she reports about what she did this weekend. Fantastic. Well, the upside is that everyone had a great time!
Mmmmm...smores! 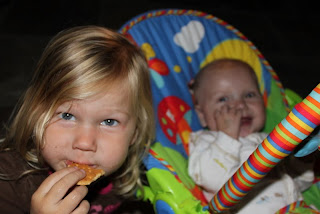 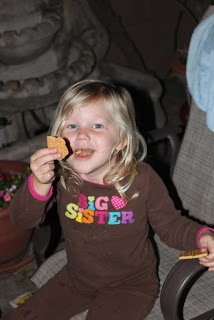 Goofing off inside the tent 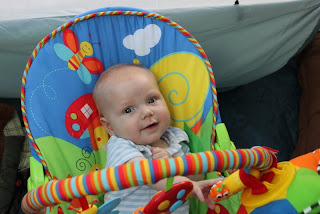 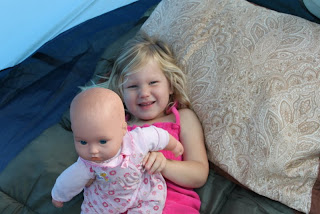 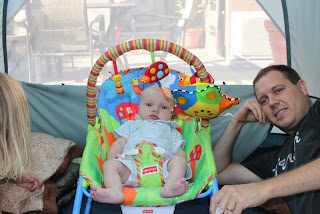